After fleeing recession-hit Britain in September 2007, I spent a year living and working as an English teacher in Beijing before meeting a girl and moving to Tianjin, northern China, which is very much like a Chinese Middlesbrough. If you’ve never heard of Middlesbrough, then you get my point. Needless to say, the girl promptly dumped me for another guy leaving me in a strange city in a foreign country with no friends and a job I hated. I taught in a primary school, and though they were sweet and adorable on the outside, on the inside those kids were the embodiment of evil. They almost broke me. I spiralled into a life of booze, solitude and borderline depression, punctuated only by the occasional bout of meaningless sex. I didn’t think I would survive another Tianjin winter, and overall the place didn’t leave a good impression on me, so I decided to run down my contract at my school and move somewhere else in China. Hopefully, somewhere warmer.

I didn’t want to teach kids anymore, so I found a job as a writing instructor at HMMC (Hunan Mass Media College) in Changsha, Hunan Province, which was about as close to journalism as I could get at the time. I didn’t know anything about Changsha. But by this time I’d learned not to jump into anything blind, so I did some research. Located on the Xiang River, Changsha is described as a ‘culturally important’ city, though not internationally recognized in the same way Beijing and Shanghai are, and has over 3,000 years of history. It was occupied by the Japanese for a short time during the Japanese-Sino war of 1937-45, and is the place where Mao Zedong (Chairman Mao, the revolutionary founding father of the PRC) went to school and converted to communism. These days, it is better known as both a commercial center and an entertainment hub, and is home of Hunan TV, one of the biggest channels in the country which pumps out endless variety and talent shows which the Chinese lap up.

Juliet, a girl I’d met whilst travelling in Shanghai two years earlier, came to meet me the day I arrived and brought a suitcase with her meaning, I assumed, she planned on staying for a while. That was fine by me. I hadn’t seen her for ages, and we had a lot of catching up to do. The very first night, things started getting hot and steamy. While we were kissing and fumbling on the sofa, she asked if I had a condom. I didn’t. But I remembered my contact from the college telling me there was a twenty four -hour supermarket nearby. I didn’t remember exactly where, but how hard could it be to find?

I grabbed a handful of money, ran out the door, down three flights of stairs, out of the apartment block and down the road. It took a while, but I eventually found the supermarket and stocked up on condoms and soft drinks. As I left, I was hit with a realization. I didn’t actually know where I lived. I was completely lost. I’d been so excited about the prospect of finally bedding Juliet that I’d left the apartment without my phone. I didn’t even know the name of my street. I’d only got off the plane about six hours earlier.

So I stumbled around for most of the night clutching a pack of unopened condoms and whimpering softly to myself. I tried to retrace my steps, but found that almost every building looked the same, especially in the dark. I eventually found my apartment again a few hours later but by then, Juliet was sound asleep and the moment had passed. I figured having waited over two years already, another day or two wouldn’t matter too much.

This is China: Misadventures in the Middle Kingdom Part 2 – Hunan Province is available now on paperback and ebook 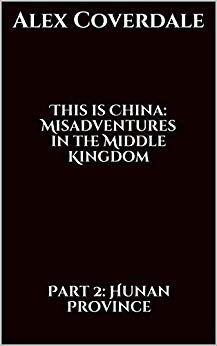